It’s July 1975 and we’re back in Brooklyn at my distant cousin’s Rite of Ordination. A group of unknown relatives from my father’s side of the family greeted us warmly at the church when we arrived from the New Jersey suburbs. After the ceremony, we attended a party at someone’s modest home, probably the family of the newly ordained priest. Because they were outside our immediate family circle, these relatives met my teenage attempts for attention with kindness and respect, instead of the usual wrist flick of dismissal I was used to. Each person I approached at the party listened with an amused smile as I tried and failed to work backwards through the family tree, from my father to our common relation. I marveled at being treated like a grown-up even as my ancestry bit tanked again and again.

Aside from the opportunity to test the patience of newfound relatives, this event stands out for the photograph of my immediate family that was taken. The picture surfaced a few years ago, after my brother Bill found it in the back of a high school album. In the photo, the family is arranged by height in offset rows. We are all dressed in Sunday clothes for the occasion, including the handmade green-and-white checked top that my mother had hemmed for me on the car ride out. The mood in the picture matches my happy memory of the day. Almost everyone is laughing broadly, as if someone off camera—the photographer, perhaps—had just told a joke to make us smile.

The picture turned out to be the last one taken of us all together. At the time my mother was about to begin radiation therapy, although she and my father kept this development to themselves. Doctors had ordered the radiation to treat her recently diagnosed bone metastasis. We didn’t know about that one, either. Despite these secrets, my photogenic mother is fully present in the photo. Her lips are turned up in her signature high-beamed smile, accentuating the rosy apples of her cheeks. Her eyes are bright and alert. Her hair is in the Jackie Kennedy pageboy with the side curls cresting at high tide once again. The only indication of illness is that her dress and matching jacket fit a little loosely, perhaps as a result of weight loss from the chemo treatments she completed earlier. Her jewelry ensemble sings a different tune, however: not one, but two long strands of cultured pearls, matching earrings, and a surprise dose of extra bling—a large, topaz heart pendant suspended above the meniscus of the pearls, in line with her physical heart.

The proximity of our bodies in the picture invokes the phrase “close family.” Immediately I am reminded of a forgotten anecdote from another get-together years earlier. I once overheard my mother boast to a relative that our family was so close, we didn’t always bother to shut the bathroom door. The straight-laced relative bristled slightly at the idea, but my mother paid no notice and just smiled. She was proud of the family and the warmth cultivated among us. The photo shows the fruit of her efforts. In the front row stands my sister Ellen, smiling broadly. Nestled between Ellen and me is my younger sister wearing a white party dress. She leans in across my right shoulder, and my mother leans into me from the opposite side, her right shoulder curving behind my left. My two brothers and father finish up the back line, not shoulder-to-shoulder, but interposed tightly among each other. Together we form a happy, easy group—a family unit.

While viewing the photo a little longer, I feel like an anthropologist examining evidence of a lost culture. After my mother’s death we all tried our best to maintain the family closeness, but we could never replicate the centripetal force generated by her presence—the social and emotional glue that bound us, the invisible thread that pulled us together in the picture. Little by little this potency disappeared. As we all grew older and moved away, we simply forgot its beneficial effects.

But that’s not all I forgot. I look at the proximity between my mother and me in the photo, and muscle memory registers nothing. The observant reader may have noticed a related phenomenon in previous posts, where few, if any, descriptions of physical contact appear. For example, in the fainting spell found in Object Permanence, there is no mention of touch, no physical connection. My mother and I move in parallel out of the church, and she is there on the steps with me, but I can’t recall any contact. From experiences with my own children I know there would have been tactile soothing: the reassuring squeeze of a shoulder, a warm hug. In my memories, my mother’s hands are nowhere. Even in the face of supporting photographic evidence, I can’t remember what it felt like to be touched by her. Those details have disappeared; the “use it or lose it” decay theory of forgetting at work. I have embraced many warm, loving individuals since my mother’s death, but it’s not the same thing. There simply is nothing on earth like a mother’s touch.

What does register from the photo is a mix of contrasting emotions. I see from my mother’s happy expression that bending close to me is a natural act, something she might do again without a second thought. This realization makes me glad now. I also see that my 13-year-old self casually accepts her mother’s proximity as if it will happen again. I am initially glad about this, too, until reality rages back. For in addition to being the last photo of the family taken, the picture marks a turning point, the end of the beginning—hereafter referred to as the “before” of our lives. Not even my parents could imagine the accelerated ticking down of my mother’s life that was coming, that indeed had already begun. In a mere ten months, she would be gone. In light of these facts the happy feelings elicited by the photo turn to feelings of foolishness and anger. I want to scold my 13-year-old self for not knowing any better. At the same time I want to bang my fists against the thick pane of decades to warn myself of what is coming, to urge myself to grab my mother’s arm and never let go, or at least to hold onto the memory of her touch.

And then one more feeling surfaces: a desire to experience what it’s like to not know. I want to enter that state of sweet innocence just one more time; perhaps the memories of my mother’s touch can be found there. But I know it can’t happen. Like the famous ambiguous figures I show to students in my Cognitive Psychology class every year, once you become aware of the existence of a hidden configuration within something you can never go back to not knowing it. 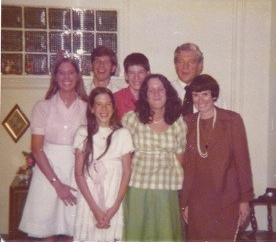 5 thoughts on “Not Knowing”

This blog explores the idea that our memories of the past can be influenced by our present beliefs and attitudes. In some posts I will attempt to reconcile firsthand childhood memories of my mother with  perspectives of her that I experience as an adult — forty-plus years after her death.