Each August my family would drive 270 miles from northern New Jersey to Cape Cod, Massachusetts, for a glorious two-week vacation. The trip was an annual highlight, rivaled only by Christmas. For weeks prior to departure we kids rode a rising crest of anticipation, comparing detailed packing lists and discussing all the ways to blow our meager allowances. On the day of travel time slowed further, as my mother chased after us with the milk container to finish every last drop, and my father condensed the clothing of five children—packed in paper grocery bags—into two duffle bags, a holdover practice from his army days. He carefully fit the bags and all of our beach paraphernalia into the foredeck of our small sailboat, the Wahoo; the rest went into our grey Dodge station wagon. Forever-and-a-day later, my mother would give the go-ahead for us to pile into the Dodge. After one last check of the brake and indicator lights on the boat trailer, my father would proclaim, “We’re off, in a cloud of steam!”

Vacation time heralded a loosening of my mother’s policy against candy. During the long drive up Route 95 we enjoyed what seemed like a continuous flow of her sanctioned stash of butterscotch discs, root beer barrels, and Payday candy bars, consumption of which was interrupted only by an occasional “Wahoooo!” shouted from the fast lane by a passing driver who had noticed the gold lettering on the boat’s transom. In addition, one of us (usually me, according to my father) would demand “How many more miles?” every thirty minutes or so. By the time we reached the arched Sagamore Bridge five hours later, Cape Cod appeared to glimmer on the other side of the canal like a pot of gold. As we crossed over, the youngest of us pretended to be swallowed alive by the gaping iron jaws of the “monster bridge,” as we called it, only to be shot out of its mirror-image tail a few minutes later. It was a sacrifice well worth admission to the enchanted, other-worldly land of the Cape.

What distinguished the trips for me was the unspoiled beauty of the Cape Cod landscape. The sandy soil and stretches of scrubby pine trees seemed wilder and more authentic than the manicured New Jersey suburbs. Back then, the lawn of the 2-bedroom cottage my family rented every year consisted only of pine needles that shed naturally from the surrounding pitch pines. They contributed to what we referred to as the “Cape Cod smell,” a mixture of salt air and sweet tar from the fallen needles bleached rosy gold by the sun. The moment the Dodge pulled up to our rental, we would jump out into the fresh air and inhale deeply. Even today that smell acts as a poultice on my memory, drawing forth hidden facts.

The cottage on Cape Cod was where I heard the first inkling of my mother’s illness. It was an otherwise unremarkable day, circa 1973. A few of us were playing in the open-plan living room, with its wood paneling and smattering of nondescript couch and chairs. The room had no air conditioning and no television. On humid days, the solution to the former was to go to the beach and move your chair one foot closer to the ocean. For the latter, we brought along an old black-and-white TV set. We were lucky if it picked up one channel in that pre-cable era. The sparse amenities mattered not one bit, however. We relished every moment in the house, even low-key games in the living room. My mother interrupted our play with some news: She was soon going to the hospital to have a cyst removed from “between her legs.” She had previously undergone a similar procedure, and the operation had been successful. As she told us these facts, her voice was calm and self-assured; it betrayed neither fear nor anxiety. I took my cue from her steady tone and went back to whatever I had been doing, but not before picturing the curious location of “between her legs” as some harmless location on my mother’s inner thigh, hidden beneath her shorts. Giving it definition like that ensured its insignificance.

In reality, my mother wasn’t having a cyst removed from her thigh. Some time prior she had found a lump in her left breast, but she did not immediately go to her doctor. How much time lapsed before she had the lump checked, and why she waited, are both unknown. As a nurse, she was surely aware of the benefits of early detection and treatment. Could her delay have stemmed from the same medical overconfidence that led to the chronically under-stocked medical supplies in our house during the Muffin-the-hamster era? When my mother did finally see her doctor, the lump was biopsied and found to be malignant. My parents could not conceal the impending hospitalization, so they concocted a ploy about the surgery.

This sequence of events occurred over forty years ago, outside the awareness of all five children, so the exact year of the mastectomy is unclear. Each family member I have spoken to remembers it differently, based on what was going on in their lives at the time. To find out more I called the Records department of Valley Hospital in Ridgewood, New Jersey, where the surgery took place, but was told that the records had been destroyed in the 1990s. Our best estimate is that it happened in late summer 1973, when I was starting sixth grade.

Within the collective family memory, there are several versions of the details of my mother’s illness, not only because autobiographical memory can be highly subjective—it can—but because my parents (particularly my mother) gave multiple versions of the facts. I have found that there were at least three levels of the “truth” told to us children. Bill, the eldest, often heard the most accurate medical information, at least in early stages of the illness. As the oldest daughter, Ellen was privy to more of my mother’s confidences. For example, Ellen doesn’t remember hearing the news of the surgery on the Cape, but it’s likely my mother had told her the general details beforehand. The youngest three siblings, including me, were told either misleading information, a watered-down version of the facts, or nothing at all.

The cyst diagnosis was the first of several deceptions my mother employed during her illness. She may have chosen this condition to divert our attention from her upper torso, which would become compromised after surgery. She was also a fiercely private person, so the false diagnosis may have been an attempt to reduce information leaks outside the family. I had seen tears in her eyes just once, when someone stole a large antique planter from our front yard. The thief had waited until darkness to remove the planter, and my mother cried at the moral cowardice of such an act. I had never seen her cry from fear; I had never seen her afraid, period, even though the cancer diagnosis warranted otherwise. She processed those kinds of feelings on her own time, or with my father. To her children and others whose lives she touched, she personified a resilient, capable woman: “the Unsinkable Mollie Wraga,” we used to joke. It would not be until much later in her illness—when the cancer had stolen through her body like a thief in the night—that we would witness the rock-bottom vulnerability to which even a strong person could descend. For me, that transformation would become one of the hardest facts to bear. 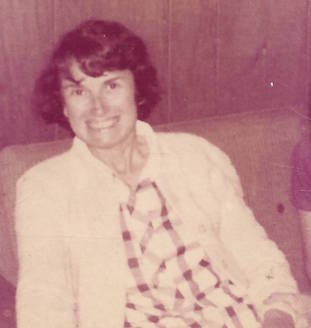 6 thoughts on “Facts on Cape Cod”

This blog explores the idea that our memories of the past can be influenced by our present beliefs and attitudes. In some posts I will attempt to reconcile firsthand childhood memories of my mother with  perspectives of her that I experience as an adult — forty-plus years after her death.